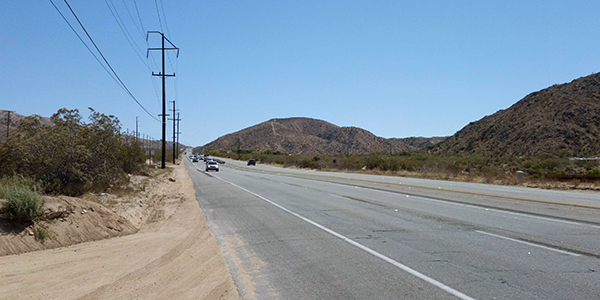 The California Desert Region where Active Atom is Located

This desert is named the Mojave Desert; it might also be called the High Desert or Upper Desert as compared to being called a low or Lower Desert.

The vast majority of the Mojave Desert resides within the San Bernardino County area.

Lance and Patrick get Thirsty

If the two of us miss anything living in the California Desert, it is water, we grew up near the Pacific Ocean and some lakes, and this desert location has nether.

What is the difference between a low desert and a high desert?

Altitude decides it all for a California Desert to be either a low desert it must be at or below 2000 feet from medium sea-level otherwise it is a high desert, but this can be confusing since Death Valley is the lowest place (below medium sea-level) in North America at 282 feet below sea-level, yet it is in the high desert, know this though this has to do more with the surrounding mountain ranges that are within the deserts.

Fact here is that while Death Valley is the lowest land mass place below sea-level in North America, it is interesting to share that this high desert location is located about 87 nautical miles south of Mount Whitney the highest mountain in North America is to located inland of Northern California at 14,505 feet elevation.

One third of earths surface area is classified as desert and know this, a desert does not have to be hot be a desert, what it must do is lose more water then it gains and there you have a desert.

One billion plus people knowingly or otherwise live in a desert.

Near our location here in Yucca Valley at a distance of 22.5 miles to our southwest is Southern California’s tallest mountain coming in at 11,503 feet in elevation is Mount San Gorgonio (Old Greyback) since she has no trees in the higher elevation areas, though grey it may be, it is also the only place to still have snow on its top when we entire the extremely arid summer season of triple digit 100 Degree ++ Fahrenheit near the end of June into early July. 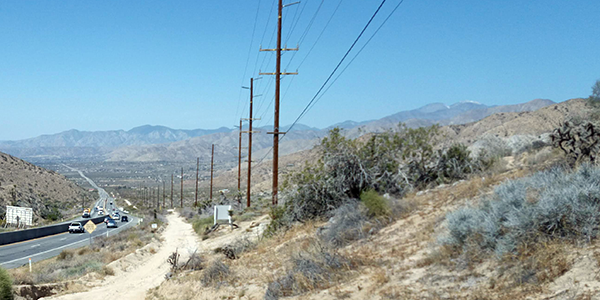 Mount San Gorgonio is not just seen from our work shop in Yucca Valley, but is also seen from the Lower Desert area named the Colorado Desert that covers the Coachella Valley and Palm Springs areas.

This mountain, Mount San Gorgonio’s eastern side is part of a series of surrounding mountains like the Little San Bernardino Mountains that are the separators of the high desert (Mojave Desert) from the larger low desert (Colorado Desert)

The late Frank “Francis” Sinatra who died at age 82, lost his mother Natalie “Dolly” Sinatra at the same age of 82 in 1977 in a Lear Jet plane crash along with two pilots when she was headed out of the Palm Springs International Airport to see Frank in Las Vegas, Nevada, the plane crashed into a mountain side when the plane did not gain the altitude to overcome the very tall and steep Mount San Gorgonio that claimed those 3 lives.

Meet the second lowest spot in California that also has a tallest mountain associated with it.

Located 80 nautical miles southwest from Yucca Valley or approximately 57.5 nautical miles southwest of Mount San Gorgonio is home to the other below medium sea-level spot in the California Desert a place that became (by human engineering accident in 1905 lasting and allowing 2 years of Colorado River water to inflow onto the salt lake bed) a salt lake, known as the Salton Sea. To this day a water mass man fed lake sits 236 medium feet below sea-level at its deepest point it is only 5 feet higher in sea-level then Death Valley.

About the Salton Sea now

The Salton Sea is 15 miles wide and 35 miles long with a depth low point of 43 feet is really salty or contains increasing salinity levels as this body of water sits on a prehistoric salt bed. Salton Sea naturally receives some annual rain fall runoff.

The Salton Sea is mostly feed water from agriculture, the Colorado River and the New River of Mexicali, Baja California to help maintain its water mass.

When was the Salton Sea a top vacation resort area?

In the 1950’s, 1960’s and a little into early 1970’s and you would have to wait to launch a boat onto the great Salton Sea, it was a very popular place with coastal living people to come out to and enjoy with family and friends.

As an interesting side note Lance Conway Partner at Active Atom spent many weekends from the mid 1960’s through the very early 1970’s water skiing, bird hunting, boating and fishing with my family, as well as a family that owned and ran a precision machine shop named Park Engineering in Buena Park, California, this is a place where my dad (Herb Conway) worked before starting out on his own in the neighboring city to Buena Park to start in 1973 Sun Eight Co, Inc. in Fullerton California. Both cities mentioned are located in Orange County, California.

Did you see and learn an interesting geological similarity that occurs of equal magnitude about the two lowest and highest places in California from this document?

These two below medium sea-level locations are within less then 90 miles of these tallest mountains they are located near, these desert lows occur south of the mountains and as with life these are not coincidences.

Land of a famous fault

This Mount San Gorgonio the great separator of the two deserts the Colotado Desert and the Mojave Desert is not just a land feature it is also near or part of the most famous fault line of earthquakes or tectonic plate movement.

The fault line is the best known fault line name in California and perhaps the world, the San Andreas Fault that runs offshore from south of San Francisco, inland through Southern California areas like Los Angeles and it ends up next to and under the Salton Sea where the mud volcanos are located.

As a hobbyist regional geologist (fun knowledge) one can read here about the violent chains of geological events that took place in the formation, topography of the Mojave Desert Region and while these events occurred all over the planet when forming this great place earth we all call home, it is because we live and work in the Mojave Desert environment fulltime we are offered direct visual access to the topography.

It is because of the lack of human interaction, dwellings, roads, fences, plant growth, etc., this makes the desert lands easier to see and learn through seeing, touching and exploring.